The Hot Spring Hypothesis for an Origin of Life

Seven Steps for an Origin of Life on land 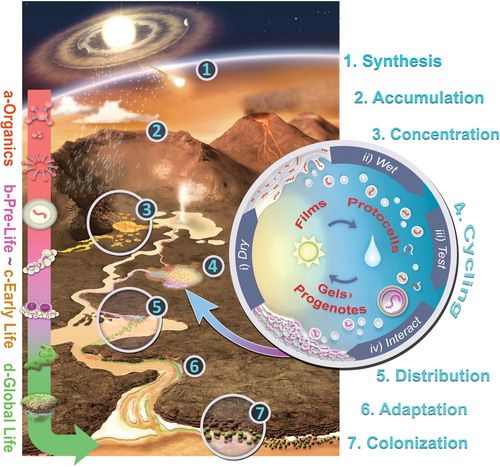 Step 1: Key organics are synthesized in the accretion disc of the newly forming Solar System over four billion years ago. They fall to Earth as meteorites and dust. If they land in the oceans the compounds are lost in the dilute buffer, but if they make it down to the surface of a volcanic landmass, they have a shot at participating in the start of life.

Step 2: Key compounds falling in from space, or synthesized within a biogenic atmosphere, or cooked up within hydrothermal systems or through rock weathering accumulate on the surface, perhaps finding their way to small pools in a volcanic caldera.

Step 3: The key to get chemicals to interact is concentration (and heat also helps) so as Charles Darwin predicted way back in 1871, warm little ponds would be the best place to cook up a “soup of life”. A hydrothermal field of interconnected pools could not only concentrate the organics but mix them between pools, subjecting them to changes in temperature, pH and different mineral and elemental influences.

Step 4: For any system to move from simpler to more complex forms (away from equilibrium) they must be subject to cycling. Flows of compounds including the building blocks of membranes and polymers, find their way into a pool which fills by a pulse from a nearby geyser, dries down, and fills again. A cycle or engine is then set up when these polymers form between dried films of lipid and bud off into membrane bounded protocells. A stabilizing effect between polymers and the membranes that encapsulate them works to allow them to be tested with some surviving until the next dry-down. As the water level drops, protocells aggregate together and form a gel-phase in which interacting metabolic cycles can arise. The aggregate fully dries down, protocells fusing into layers where polymers re-synthesize, template and elongate. Over many such cycles the first primitive functions of biology emerge as populations of protocells and their polymers undergo combinatorial selection. Eventually, protocell aggregates are capable of collective evolution and become robust to distribution as the first progenote, a pre-life form on the way to the rise of the first microbial communities.

Step 5: As protocell aggregates (progenotes) distribute from their home hot spring pool they flow downstream into other pools, or blow preserved as dried films across a wide landscape. Relocated protocell colonies must adapt to a variety of conditions. In cooler and more dilute streams and ponds beyond the rich chemical and energy sources of hot springs they must evolve ways to capture sunlight in the first primitive forms of photosynthesis. In such an environment of horizontal sharing of the products of molecular evolution, the first dividing, living cells arise and fragile forms of early life populate freshwater settings on the land.

Step 6: Early life adapts to an increasingly diverse variety of settings, including streams, ponds, lakeshores, and even cracks in rocks and eventually finds its way to the increasing salty settings of coastal estuaries. At this time, energy-driven active pores and robust cell membranes must have evolved to permit existence in higher salt environments.

Step 7: As early life becomes more robust, it can survive in the violent tide and storm influenced sea shores and then gains global accesses to colonize a large living space at the edges of and within the world’s oceans. Along their journey, microbial communities lay down the telltale signs of their presence in the fossil record as stromatolites discovered in rocks ancient preserving marine, lakeshore and hot spring environments.

To follow along with this scenario, here is a cool (well, rather hot) video about how life could have started when a meteor fell to Earth (produced by the University of New South Wales, Sydney Australia)

Find the paper "The Hot Spring Hypothesis for an Origin of Life" with the full scenario here.